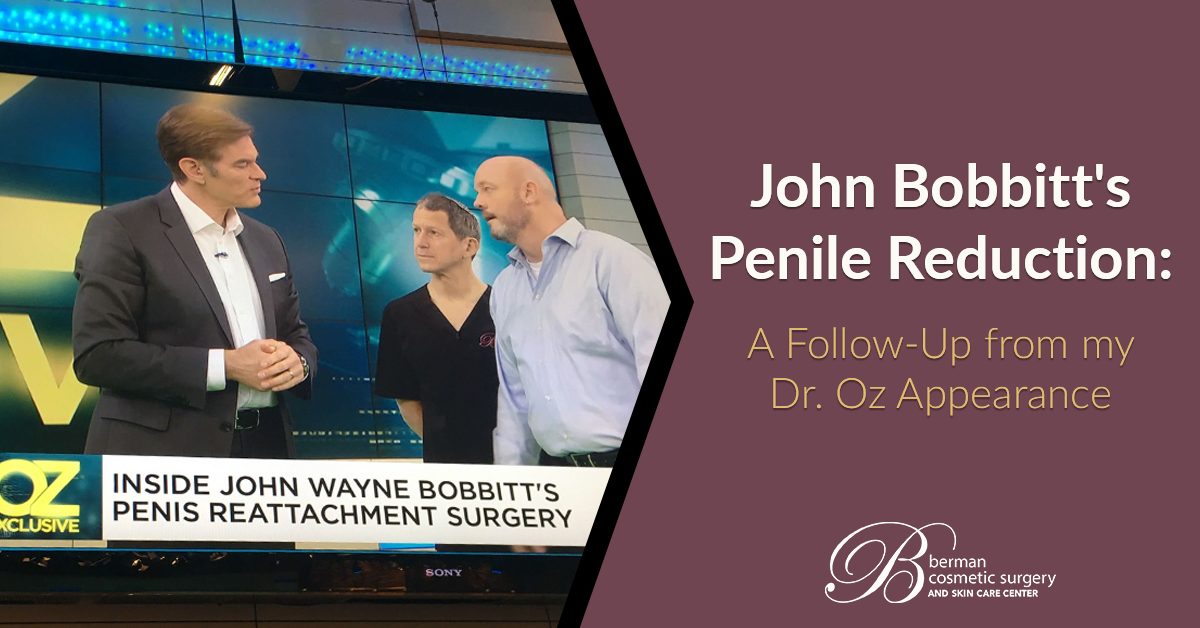 Since my appearance on the Dr. Oz show on February 5th, 2019, I’ve had quite a few people ask what John Bobbitt was referring to when he said he had a penile reduction by me after his penile augmentation. On the show, John briefly mentioned that he had penile reduction surgery after his ill-fated penile augmentation. However he provided few details.

As most people are aware, I reattached John’s severed penis on June 23, 1993. Howard Stern paid for John to get a penile enlargement from Dr. Mel Rosenstein. To my surprise, there is a Howard Stern video discussing John’s surgery with both John and his surgeon. John says in the video that his penis looked like he had elephantiasis. Howard Stern commented how deformed it now looked and said that the surgeon no longer performs this surgery. I believe this occurred about one year later. From what I understand, he had a huge amount of fat transferred around the shaft of his penis. He also had a release of the penis from the pelvic bone. John did not ask for my advice about doing this. I would have strongly advised him to leave well enough alone. I had lost contact with John a few months after his reattachment. I did not hear from John for nearly 22 years when Reelz TV did a show about the topic. When they interviewed me, they told me that they had interviewed John the day before and gave me his contact information. We connected by phone and a few months later, John came into my office. He told me that he had a fat transfer/enlargement that was “messed up”. John was not able to find his surgeon and asked if I could restore him to normalcy. He also said that with the huge amount of fat transferred, it made sexual intercourse difficult, since the fat would shift towards the base of his penis.

He came to my office in early 2016. Under local anesthetic with oral sedation and through a single incision on the dorsum, I was able to remove all of the added fat. I removed more than an overflowing handful of fat from his penis. It took several months for the swelling to completely resolve but he is now comfortable again.

2 thoughts on “John Bobbitt Post Surgery: A Follow-Up from my Dr. Oz Appearance”